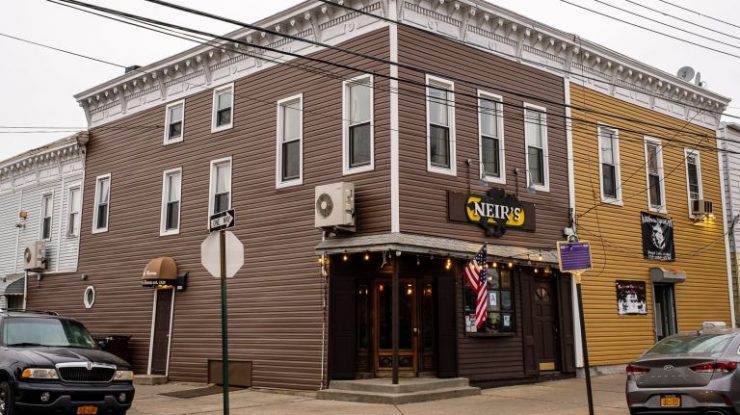 Loycent “Loy” Gordon owns Neir’s Tavern, one of the longest-operating bars in the United States and debated as the oldest in New York City. Located in Woodhaven Queens, Neir’s recently celebrated its 190th year of operations. It was the setting for scenes from the films  Goodfellas  and  Tower Heist , the place where Mae West first performed and the subject of an episode of Anthony Bourdain’s television show “Parts Unknown.”

Loy, a Jamaican immigrant and lieutenant in the NYC Fire Department, took management of Neir’s in 2009. He worked to keep it a hub of community activity in his largely working-class neighborhood. “As an immigrant, I saw Neir’s could be a vehicle for me to contribute to Queens, the place that gave me everything. I am holding onto what I feel is the last beacon of hope for a true community place of belonging, and I am holding onto something that is slipping through our fingers. Keeping it open another minute, another week is important because whoever walks in the door, whether they look like me or you, they are accepted, they belong, and I love that.”

In December 2018, the building was quietly purchased by a new owner who raised the monthly rent from $2,000 to $3,000, and then said it would be increased to over $5,000. The rent was unaffordable, but Loy tried to push forward. After operating in the red for eight months, on January 12, 2020, Loy announced it was Neir’s Tavern’s final day. “I’m sorry I let you down,” he told the community.

After making the announcement, Loy received multiple offers for help from the bar’s many longtime supporters. It wasn’t until after appearing on a radio show that Loy was connected with NYC’s Office of Small Business Services, who committed to a $90,000 small business grant for upgrades and brought in Brooklyn A to represent him through the Commercial Lease Assistance Program.

Brooklyn A attorneys met with Loy, the building owner, Council Member Robert Holden (D-30), Assembly Member Michael Miller (D-38), and Thomas Grech from the Queens Chamber of Commerce for negotiations. They learned that a significant problem for the owner was that he could not get a mortgage because the building lacked a proper certificate of occupancy and did not meet current zoning rules. Council Member Holden committed to working with the building owner to ensure that the building met all the requirements.

Brooklyn A attorneys worked with all parties to come to an initial oral agreement on a five-year lease that would keep the rent at $3,100/month for 2020, increasing 3% each year thereafter, with an option to renew for another five years. This allowed Neir’s Tavern to stay open . However, the lease was not yet finalized when COVID-19 hit NYC. Neir’s Tavern, like so many other small businesses, was forced to shut its doors.

Brooklyn supports resilient small business owners through the Commercial Lease Assistance Program (CLA). The City’s preliminary budget for the next fiscal year has eliminated the CLA Program, the City government’s only full-service legal representation program for small businesses, at the height of the COVID-19 crisis when the City’s most vulnerable small businesses need legal services the most. We are continuing to fight to save these essential services.

One of the many strong mothers in our community…

“I am doing all I can to stay afloat.”

Earlier this week, you met Tammeca Rochester, the owner and founder of Harlem Cycle , Harlem’s…

When Tammeca Rochester, a lifelong athlete, wanted to go to spin class, she would have…